Bordered by economic giant China and India, Nepal could not be separated from the famous Himalayas. Nepal is rich in amazing tourist attractions. With eight of the ten highest peaks in the world is located there, the natural scenery of Nepal, is amazing. In this article I am going to show you 5 best tourist attractions in Nepal.

Nepal is a land of thousand temples. The nickname was not excessive given to Nepal. In the Valley of Kathmandu, the capital of Nepal, at least seven large complex Hindu or Buddhist temples thousands of years old. In every temple complex can be found tens or even hundreds of temples, big and small, built by a variety of different dynasties monarch ever ruled in Nepal. Seventh temple complex, are entirely protected heritage site of the United Nations (UNESCO World Cultural Heritage Sites).

Here are the best tourist attractions in Nepal you can visit: 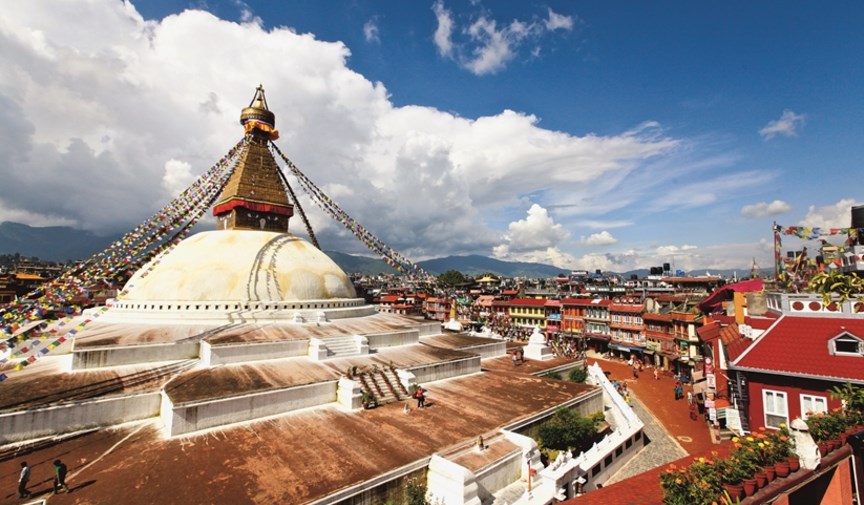 Nagarkot is a popular tourist spot in Nepal. Nagarkot is located 32 km east of Kathmandu at an altitude of 2175 masl. Panorama of the main peak in the eastern Nepal Himalaya, as well as Sagarmatha (Mount Everest), can be seen from Nagarkot. Himalayan peaks like Manaslu (8463 meters above sea level), Ganesh Himal (7111 masl), Langan (7246 masl), Choba Bhamre (6016 masl) and Gaurisankar (7134 masl), all clearly seen from Nagarkot.

Neighboring city of Kathmandu, Pokhara, also one of the popular attractions. The third largest city in Nepal is known as the gateway to the basecamp Anapura ascent, one point stop at the foot of the Himalayas. Pokhara offers trekking tour which generally take up to 25 days of travel. The city is also famous for its three stunning lake, one of Phewa Lake, with views of the snowy mountains of the Himalayas.

Lumbini is the pilgrimage tourist sites because that’s where the birthplace of Siddharta Gautama or Buddha. Lumbini is a small town in southwestern plains of Nepal, where the ruins of the old city can still be seen. The followers of the Buddhist sects, Hinayana and Mahayana Buddhism truly appreciate Lumbini. This park has been restored and the area around Lumbini have the remains of many ancient Stupas and monasteries. A large stone pillars are said to be founded by the Emperor Asoka Maurya in 250 BC as an inscription about the birth of the Buddha.

Day 1
Arrive Kathmandu and transfer to the hotel:
Arrive at Tribhuvan International Airport in Kathmandu. Meet and traditional welcome assistance by our representative & get transferred to Kathmandu hotel. Welcome drink followed by tour briefing. Rest of the time is free to explore as own. Overnight stay at Kathmandu.

Day 2
Kathmandu Sightseeing:
Breakfast & proceed for the full-day sightseeing tour to Kathmandu valley visiting Pashupatinath temple- holiest and oldest Hindu temple, Boudhanath Stupa- one of the biggest stupa of the world. Swoyambhunath Stupa known as monkey temple – oldest Buddhist stupa situated on a hill overlooking the Kathmandu valley and offers fantastic views over the city of Kathmandu and eastern Himalayas. Patan Durbar Square, most prominent place to see is Krishna Mandir which was built in the seventeenth century. This temple holds a commanding position in the palace complex of Patan. It is supposed to be the first specimen of Shikara style architecture in Nepal. It is the only temple in Nepal having 21 spires and is completely made of stone. Golden Temple and Durbar Square are some important places to see.Overnight at hotel.

Day 3
Drive Kathmandu – Pokhara:
Breakfast & scenic drive for Pokhara( 210KM /6- 7 hours ) observing the greenery hills on the national highway along with Trishuli River.On the way you have an option of doing the river rafting or visit the Manakamna Temple. Manokamana is believed to be a temple of goddess who fulfill the wisheswhere you are taken by a cable ride of 8 mins. Arrive Pokhara(Lake City), check into the hotel. In the evening enjoy 1 hr boat ride in fewa Lake&walking around the tourist area of Lake Side. Get back to hotel and overnight.

Day 4
Sarangkot for view of Sunrise over Himalayas & Pokhara sightseeing:
Walk up early, proceed to Sarangkot for sunrise view over Himalayas including Mt Fishtail, Manasalu, 5 peaks of Annapurna and Dhaulagiri and beautiful Pokhara Valley. Then get back to hotel for breakfast. After taking a short rest, move towards the sightseeing of Pokhara covering Devi’s fall, Guptepswor Mahadev cave, Bindabasini temple, Seti George. Overnight at hotel.

Day 5
Drive Pokhara – Kathmandu:
Breakfast & drive back to Kathmandu. Arrive Kathmandu and check into hotel. Rest of the time free for extra activities like shopping, visiting around tourist hub of Thamel etc.Finally overnight at hotel.